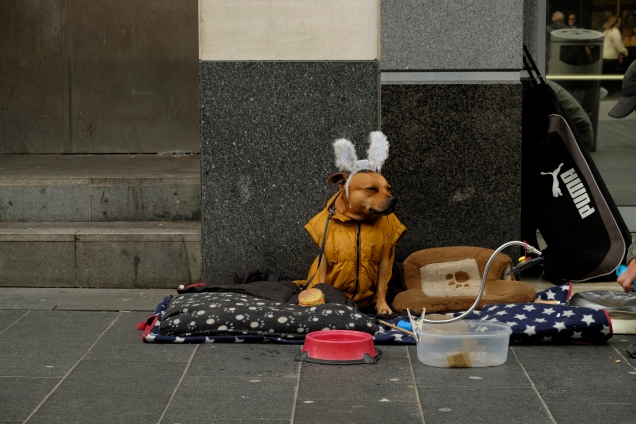 (If you are new to the blog. I’m walking to John O’Groats. A leg infection obliged me to stop until I recovered. The journey starts with the post on the right, ‘Where shall we park the car?)

It was the leaving of Liverpool and it wasn’t;  not if Aintree is part of Liverpool, which on the map it looks as if it is.

I landed mid morning at John Lennon Airport and took the bus into the centre of the city. It was a fine Saturday morning and humming.

I wanted to change my telephone.  I spent quite a long time with Roy in the Vodaphone shop. By the time I left it the crowds were even thicker and it was after midday.  I walked down to the docks where I had stopped walking weeks earlier. Then I turned left and walked North East along the river front, past flattened warehouse space, empty docks, converted warehouses. 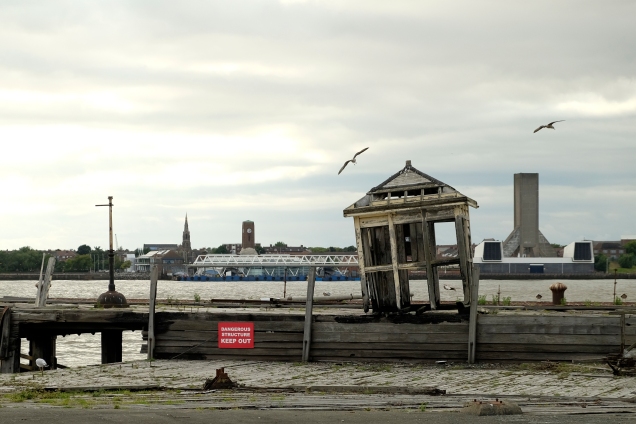 I walked past dock gates with names like Victoria and Trafalgar, opening onto an an expanse of leveled hardcore and cobbles, the teeth of a city ground to the bone, then the thin gleam of the river, Birkenhead, and a sky like a dirty aluminium pan. I didn’t have a street map and had not yet worked out how to use the navigation tools on my new telephone, so was navigating from my 1:50,000 OS map and compass.  There was no one about.  It was quieter than early Sunday morning, except that it was Saturday afternoon and I wondered what it would be like on a week day.

I walked past a boarding house. There was a girl leaning against a first floor window talking on a mobile telephone and moving in time to music. She had blond hair and wore hot pants. Hotpants! Outside a large bearded man stood on the pavement. He wasn’t waiting. He was just standing. Something about him made me think he might be the exception that proved the rule that Liverpudlians are friendly and sociable. I walked on, past a magnificent Tobacco Warehouse, awaiting conversion to flats or demolition, then over a metal swing bridge and on until I decided that it was time to turn East. I wanted to join the disused railway line which is a public foot path and which would link to the Leeds Liverpool Canal. 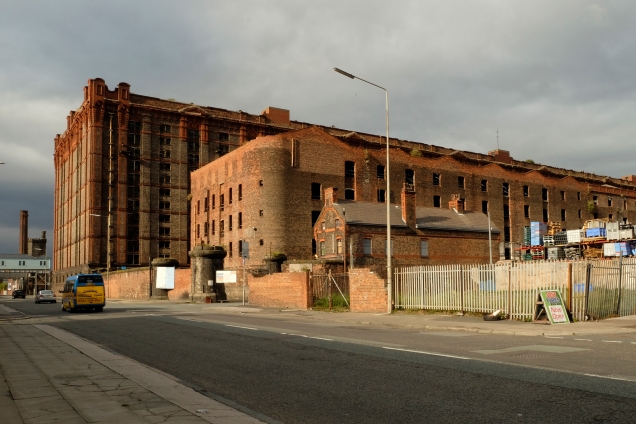 I was walking up hill away from the river.  I walked past an empty park. I badly wanted to pee and walked off my route to a garage, where I bought a sandwich. The man at the till told me that the w.c.s were for staff only. He told the same thing to the motorist behind me. ‘Blinking ‘eck. I’ve been peeing in here for the last thirty years and that’s the first time I’ve heard that’.

I walked up a street of terraced houses. A man came out of his front door wearing a grey track suit. He looked as if he had only just woken up. He lit a cigarette inhaled deeply arched his back, stretching his arms above him, exhaling smoke and revealing quite a lot of pale stomach skin.  I walked past a church yard, dark sooty grave stones, dark greens then to the dual carriageway intersection. I found a place to have a pee below an ornately carved 19th century coat of arms dedicated to the glory of the borough set into a concrete wall. I crossed under the intersection and continued east. Now I was walking down the street of salons: beauty, hair, tanning, pet grooming, nail painting, and pedicure interspersed with convenience booze stores and takeaways. Most of them were shut though some of the booze stores were open.

It was late afternoon, grey skies, empty streets, rollerblinded shops. I wondered where I would sleep.  I had an idea that I could find a place to pitch a tent on a piece of urban waste ground or on some of the green space on the edge of the city: urban camping. I kept on walking.  I knew I had to turn left or north somewhere here to meet the abandoned railway line.  I followed a street of terraced houses and to my amazement saw a blue cycle way sign. This must be the abandoned railway exactly where it should have been. I turned left or north onto it. I saw no one. It had taken me a long time to get this far and I was still a long way from the limits of the city.

The track followed a cutting whose steep banks were covered in willow and blackberries. I have never seen such big blackberries. It was as if they were cultivated. They tasted delicious, sweet and perfumed. I would have happily stayed to collect them in large quantities. As it was I would walk for a few minutes and then unable to resist,  stop, pick a hand full and cram them in my mouth.  I saw no one.  It must have been after 6.oo pm.  I came to a place where the track passed under a wide road. It was a bridge but felt more like a tunnel,  rectangular with an cinema screen of light at the end of the darkness.  I walked in.  There was little graffiti. I walked on. It became darker. I concentrated on the patch of light and wondered what I would do if one of the lumps dimly perceived  at the side of the tunnel rose up, men in rags and tried to attack me.  I couldn’t run.  But nothing happened except for the metalic rumble of traffic above.

I walked on and then in the distance heard a terrible cry, that of a soul in torment, rather than of physical pain, repeated again and again. I came to another tunnel though this one was shorter and then as I walked through it I heard the cry again louder. I wondered what awaited me.

The track swung out of the tunnel into a gentle curve to be crossed by another path. There was quite a lot of space, bracken brambles the kind of place I could conceal my small tent, I thought.  Then I heard the cry again, this time more like a cry of triumph and I saw a group of children running towards me on the upper path.

‘Welcome to Liverpool,’ One of them shouted.

‘Welcome to the shit hole’, shouted another ‘….Well not Aintree but here.’

‘We’re er yer from?   Do yer camp out every night? What’re yer doing it fer?’

I explained and handed them Romilly stickers. ‘I’ll sponsor you.’  ‘So will I.’  ‘Wher’ll you sleep tonight?’

‘I thought I might sleep out here on the railway track.’

‘Not ternight yer not’, said a diminutive boy.

‘Yu’ll be mugged.’  They looked at me worried.

‘You should go to the Premier Inn.’ Said the girl. ‘There’s one at Aintree. Here, let me see If I can find it for you.’  She consulted her mobile telephone and called. There were no rooms. The girl looked concerned. ‘I’ll see if I can find you somewhere else.’ The other children crowded round as she bent over her phone.

‘Ere, luke at the hair on ‘er’, one of them said. We all looked up. Three young people wearing a mix and match of army surplus, denim, and goth black were walking down the path: a different tribe. One of the girls had purple hair.

‘Hippies’, said one of the boys scornfully.

‘Ya, Puma warriors!’ jeered another.  The puma warriors kept on walking, wisely I thought.

The children called a couple of other hotels. None had rooms. They thought I’d find something in Aintree and gave me directions.

‘Say yer haven’t got a phone’

‘Say no thanks and keep walking…or they’ll do yer’.  I looked down at the pale half circle of their upturned faces. They were concerned.   I thanked them.

I found the Kentucky Fried Chicken and turned left down the high street.  I hadn’t gone more than a couple of hundred yards when I saw a railway bridge above it and a blue sign to the cycle path.  ‘What the heck’. I didn’t want to pay for a hotel. I walked back up some greasy stone steps to the path and turned east. But then there was sign which seemed to indicate that I was going in the wrong direction. Further down the path I could see the smudged outline of two people in the gloom. I got out my torch to look at my map.  That definitely seemed to indicate that the path went north east, but the sign seemed to be saying the opposite.

‘Alright?’ asked a friendly voice. The smudged silhouettes had turned into dog walkers. ‘Yes, thank you. Fine.’ I didn’t want to get into a long discussion. They moved on. I turned off my torch and the gloom closed around me, a pale path ahead through deep shadow.  I walked a few yards and came to a second sign. This too indicated that I was going in the wrong direction. I got out the map and my torch.

‘Lost?’ It was the dog walkers again. ‘No. Not lost but I’m not sure which direction to take. My map says I should carry on down the path. The sign says the opposite.’

‘You don’t want to stay on the path at this time of night…definitely not’, said the man. ‘There’s a premier Inn just down the road. Go there’ I explained about the rooms. ‘You can’t stay here. Y’ll be mugged. They’ll sort you out. Come with us we’ll show you the way.’  And so I did.

‘I wouldn’t come up here without my husband’, said the woman, ‘It’s the lads. Saturday night. You just don’t know. That’s why we came back. We couldn’t leave you up here on your own.’

And sure enough when I got to the Premier Inn the very nice girl at reception remembered that the there was a room without a television which they weren’t allowed to sell. A room without at telly: urban camping. Bliss.

If you would like to help Romilly help street children donate at http://virginmoneygiving.com/team/RomillysOneIslandWalk