I was setting out on Romilly’s One Island Walk, from Land’s End to John O’Groats. I expected this part to be tough.

The day before I had traveled up from Exeter by train. I had lost my over sixty discount card. Rather to my disappointment none of the ticket inspectors asked me for it. My B and B was immaculate. If you ever need to stay in Gretna this is the place. It’s near the station and only a short walk from the famous forge where, presumably, you would be  getting married.

‘There’s not much else to do. We used to have the MOD and the nuclear nearby but they’re running down’.

After a delicious breakfast I had asked to borrow a pair of scissors to trim excess weight off my maps.  I ripped out the part of my book, which I had already read. My landlady looked shocked.  I did not do this to upset her: on the wall I had seen the the prize she had won for literature as a child, but ‘Tom Jones’ is quite a chunk to carry.

‘ You should get a Kindle. People used to leave books behind but now they’re all on the kindle’,  she said.

The wind was cold but spring was in the air. It was sunny and the lambs frisked in the fields,  like animated, tea towel sized fragments of the fluffy clouds above. The keen air was full of energy and hope. I felt happy.

After about an hour I came to a farmer feeding his sheep.  ‘We live in a peaceful place. When you wake up you’ve got to look forward to the day, haven’t you? People think we make money but it all goes back into land. You’re just keeping it for your children. I don’t know why dairy’s crashed but it has.’ He did not seem unduly worried though: a nice man.

I followed his directions, walking through his farmyard, past that of his neighbour, through past more farm buildings, and crossed a stream. 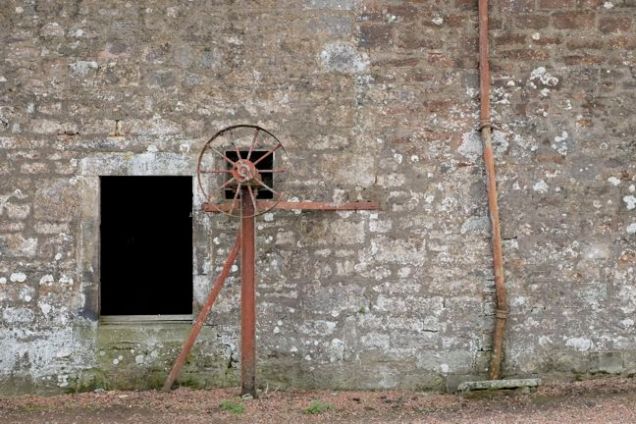 In a wood I saw a strange concrete building, its roof covered in moss and grass, from which small saplings grew.

Behind a barn I jumped down into a field.  Rather pleased with this athleticism, I walked down into a valley, crossed another stream and walked up hill to an abandoned stedding.  Here I had lunch in the sunshine,  with my back to the wall,  eating the tin of mackerel I had bought the night before.

A mile or so on and the track led through another farm yard. There was a small family in the road, a cow, a very young calf and a bull. The bull stepped forward and squared up to me. I walked back to a gate and round the farm, down to another stream which I jumped across and then back onto a track.  Decrepit machinery, was rusting in the fields. The house looked uninhabited. Someone had recently cut down an ash tree. The bright new wood shone, but elsewhere buildings and machinery showed years of neglect.

I crossed the B7088. My plan was to walk the five miles across the hills to join the road leading up to Eskdalemur. I followed a track due north towards the moor. At the last cottage I knocked on the door. No one seem to be around and I was just about to leave to see if I can find an outside tap when the door was opened by a woman on crutches.  She asked me in. We went into the kitchen and she ran the tap.

She asked me what I was doing.

‘Yes, you don’t think it’s going to rain?’ I asked

‘Sure to.’ She had just had a hip operation ‘My brother’s helping me….. Dave, di ye hear that? Man’s walking to Inverness’.

Dave came in and lowered himself into her arthritis chair. ‘Nooer? And Samye Ling ternight? O’er hills?. Ternight? In this weather ?’  I looked out of the window. The sun was shining.

I thanked them both. They were kind and good humoured. We had had a laugh. Outside it started to pour with lumps of frozen water. I walked up hill.  It was very cold. Luckily the rain stopped but I sheltered in a dip to put on more clothes.

It was dark by the time I reached the monastery. I had been walking for 14 hours and had traveled about 23 miles.

I am walking a long way to raise money to help home less children.  Please donate.